Before you do ANYTHING, please read this awesome post from one of our participating agents, Julia Weber. Seriously, PLEASE READ IT. 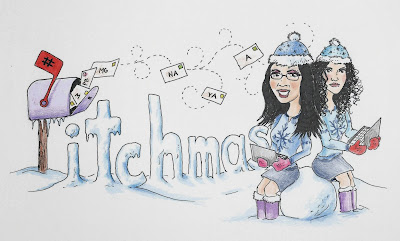 The blog pitches have been submitted, the window has closed, and Tamara and I are busy selecting our TOP 75 pitches!
*When we finally come to an agreement--easier said than done--these TOP 75 will be posted on the  #PitchMAS blog, NOT this blog!

There have been some AMAZING pitches! But, if you don't make it to the TOP 75, and even if you do, this is only the FIRST half of #PitchMAS!

On Friday, 12/20/13, we will begin our Twitter pitch party! ANYONE can participate! It doesn't matter if you've made our TOP 75 blog pitches (or not), or even if you submitted a blog pitch (or not). We urge EVERYONE to participate in the Twitter pitch party as well because we've been known to attract a few ninja agents and editors in the past!
*The ONLY stipulation is that your pitch must be for a completed manuscript only. Also, please keep your Twitter pitching to no more than two times per hour, per manuscript.

I'm assuming you participated in our awesome pitch-honing workshop HERE, and received a ton of feedback from your peers. You did do that, right? RIGHT?

No? Well you're in luck!

And even if you did participate, I know that we can still question ourselves like crazy--we're writers, duh--so if you'd like a bit more help/feedback on your 140-character or less TWITTER PITCH, I'm opening my personal blog for this purpose.

I also highly recommend squeezing in category/genre IF POSSIBLE.

Please post your pitch in the comments below and start helping one another hone those bad boys!

20yo Analisa has 40 days & 40 nights to change her fate aboard the Ark of Dreams, or risk being forced to repopulate new world. #PitchMAS NA


(PS. You may never actually ADORE your Twitter pitch, but we do want you to at least like it. A little.)
Posted by Jessa Russo at 9:20 AM 263 comments:

Happy Release Day to Rick Chiantaretto! DEATH OF THE BODY is out now!

Today is the release day of Death of the Body by Rick Chiantaretto!

Come celebrate the release of Death of the Body on Facebook on Saturday  December 14, 2013!

I grew up in a world of magic. By the time I was ten I understood nature, talked to the trees, and listened to the wind. When the kingdom of men conquered my town, I was murdered by one of my own—the betrayer of my kind. But I didn't stay dead.

I woke to find myself in a strange new world called Los Angeles. The only keys to the life I remembered were my father’s ring, my unique abilities, and the onslaught of demons that seemed hell-bent on finding me. Now I must learn who I really am, protect my friends, get the girl, and find my way back to my beloved hometown of Orenda.

I’ve often been accused of having done more in my life than the average 30 year old, but if I were completely honest I’d have to tell you my secret: I’m really 392.

So after all this time, I’m a pretty crappy writer.

I have one book published but out of print, one coming out soon, and a bunch half written (when you have eternity, where’s the reason to rush?). I’ve been favorably reviewed by horror greats like Nancy Kilpatrick, and my how-to-write-horror articles have been quoted in scholarly (aka community college freshmen’s) papers.

I enjoy the occasional Bloody Mary, although a Bloody Kathy or Susan will suffice.

Mostly, I just try to keep a low profile so people don’t figure out who I REALLY am.

I'm celebrating the debut of Jody Holford's holiday novella, FOREVER CHRISTMAS! Check out the blurb below, and then scroll down for a sneak peek!

--->GIVEAWAY!<---
I am giving away two copies of FOREVER CHRISTMAS, so comment below with your favorite Christmas tradition, and on Thursday, I'll randomly pick two winners to receive a copy of Jody's novella! 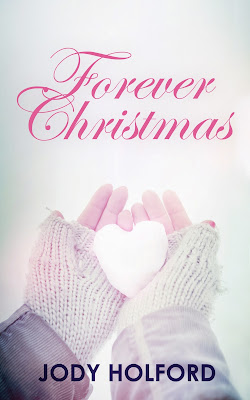 When Anna Meyer’s purchases the home that her late mother grew up in, she’s determined to prove her independence to herself and to her well-meaning father and brother. She’s been lovingly sheltered and protected for all of her 26 years but now she just wants to live her life- on her own terms.

Sam Gardner hadn’t given much thought to who would move next door to his small Angel’s Lake bungalow. Once his neighbor arrived however, he could think of nothing and no one else. When Anna makes it clear that she’s not interested in having a man around, he invents a girlfriend to put her at ease.

Thinking that Sam has a girlfriend makes it easier for Anna to be herself and open the door to friendship. He frustrates her, makes her laugh, and challenges her but he never tries to step on her independence. The more time they spend together, the more she realizes that whoever has Sam’s heart is a lucky girl.

The only girl that has Sam’s heart is Anna but there’s no way he can tell her this when he started this friendship on a lie. Things take a turn for the worse when Anna mistakes a nightmare client as Sam’s fiancée.

Anna came to Minnesota to fight for her independence but she ends up fighting for much more.

EXCERPT
She laughed it off easily, like she did most things. She was the only woman he knew that didn’t fret about her appearance. Not in the morning when he woke up to her, as he’d had the pleasure of doing for the last few days, or when she noticed she wore mismatched socks, or didn’t have make-up on. Along with being sexy, sweet, and determined, she had a graceful self-confidence that knocked him flat. She turned in his arms and pressed her lips to his again, taking her time.
“You hungry?” she asked, backing up to clean up her mess.
“Mmhmm,” he replied, moving closer again to nuzzle her neck. She laughed.
“I didn’t mean that. I was going to make some pasta,” she replied, tipping her neck so he could press kisses along her shoulder.
“Well, actually,” he replied, turning her to face him again, “my mom is having this open house thing that she does every year. I don’t usually go but Melissa…let’s just say my mom would really like me to come. With you.”
Her face brightened like he’d bestowed jewelry at her feet and he had to wonder if he hadn’t described his family well enough.
“Do you want me to go with you?” she asked, taking her flour covered apron off to reveal a blue and white t-shirt that read “I got Smurfed” and had a picture of the Smurfette character he remembered from childhood. His eyes found hers again.
“Anna, I don’t just want you to go with me. I don’t want to go without you. I’m finding I feel that way about more and more things lately,” he replied, reaching out to push her hair away from her face, tucking it behind her ear. She had flour on her cheek too that he wiped off with a smile. The smile on her face was stealing his breath and making his eyes burn.
“Sam,” she whispered, her hand coming up to grasp his wrist. The emotion in her eyes just about choked him. He hadn’t found one moment in the last four days that he could look into those eyes and tell her what an idiot she’d fallen for; it would break her heart and he couldn’t.
He kissed her to stop her from saying anything more. He tried to lighten the mood and the intensity that was always present between them.
“You should probably change your shirt. Unless you want to tell my mom what it means,” he smiled. She smiled back but her eyes were wet. Another twist on his heart. He could see everything she felt in her eyes. They were as expressive and unguarded as the rest of her and he wanted so badly to tell her he felt the same but until he’d told her the truth, he wouldn’t. After Christmas. He kissed her again, harder, distracting them both but not enough to make him forget that he didn’t deserve her love.

Happy #CyberMonday! EVER is FREE and EVADE is just $0.99! #EVERTrilogy

EVER is still free, and EVADE is discounted to just $0.99 today only!!! 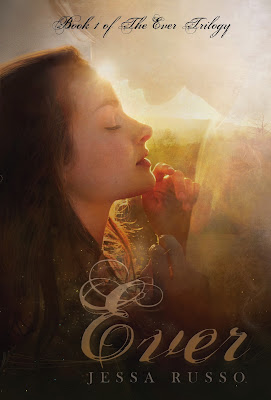 EVER, Book 1 of The Ever Trilogy 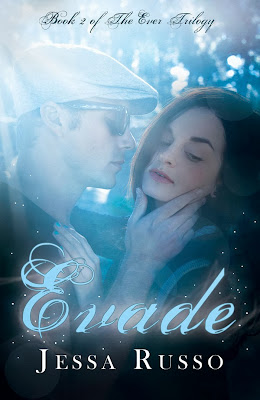 EVADE, Book 2 of The Ever Trilogy

Barnes & Noble
Posted by Jessa Russo at 6:39 AM No comments: